Bugga Ramalingeswara Swamy temple is on the bank of the Penna river in Tadipatri was built between 1490 and 1509 by Pemmasani Ramalinga Nayudu I, a Pemmasani Nayaka chieftain of the Gutti-Gandikota region during the reign of the Vijayanagara Empire.

According to legend, the temple has been established at the site, where sage Parasurama lived and performed meditation.

The presiding deity is a linga, considered to be swayambhu The temple has seven small independent pillars in front of the Vishnu shrine and when struck they produce saptaswara. The gopurams of the temple are unfinished and were described by architectural historian James Anderson as wonders. It was likely built between 1490 and 1509 during the reign of the Vijayanagara Empire. As per the Tadipatri Kaifiyat collected by Colin Mackenzie in 1802, the temple was built by Ramalinga Nayudu, a chieftain of the Gutti-Gandikota region in the Vijayanagara Empire.

The temple consists of a sanctum, ardha mandapa, and Mukha mandapa in an axial line. The temple contains bas relief structures illustrating episodes from Ramayana and Mahabharata. The presiding deity is a swayambhu naturally occurring or self-originated. Unlike other Hindu temples where the deities are east-facing, in this temple, the Shiva linga faces west. When struck, the seven pillars in front of the Vishnu shrine produce saptaswara. The architectural historian James Anderson described the gopurams of this temple as wonders. 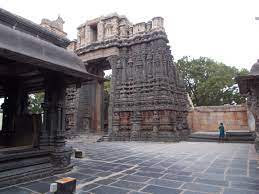 Also Read Place To Visit In And Around Anantapur District