Hemachala Lakshmi Narsimha Swamy Temple-Mulugu is also called as Mallur Lakshmi Narasimha Swamy Temple. The temple is located in Mallur village of Mulugu District. The temple is from before the 6th century. The sage Agastya named the hillock Hemachala. People say that Ravana gifted this place to his sister Shurpanaka. This place is where Lord Rama killed nearly 14,000 demons led by Khara Dushana.

The dwajasthambham at the temple is nearly 60 feet in height. There is a rock formed Ugra Anjaneya Swamy Statue near to the temple. The villagers believe that Anjaneya swamy present there act as Kshetrapalaka for the fields present at the village.

There is a continuous water flow near the temple, where its from the top of the hills. The temple has been renovated during Godavari pushkarams 2003. This temple is located approximately  90 Km from Bhadrachalam.

The temple will be closed from 5.30PM onwards as Lord Narasimha Swamy wanders around the temple and forest. 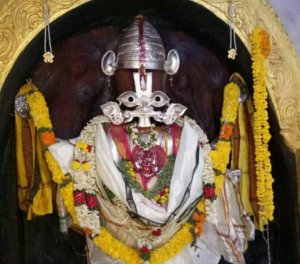 By Air: The nearest airport is Hyderabad, Shamshabad Airport which is 300 km away.

By Train: The nearest Railway Station is Manuguru

By Road: There are TSRTC buses from Bhadrachalam to Hanumakonda (via eturunagaram, manuguru), which have a halt at mangapeta on the road. Own Transport or Autos can be preferred from mangapeta to the temple.

Also Read About Places to visit in Mulugu District