About and History of Pazhavangadi Ganapathy Temple

Pazhavangadi Ganapathy Temple is connected with Padmanabhapuram, the erstwhile capital of Venad. The legend says that being the capital and seat of the Raja, the soldiers had to guard the Padmanabhapuram Palace and the Fort on all sides by sentries. On one of its sides is the famous shrine of Yakshi (fierce Spirit Goddess) at Melaankot. Because of the greater fierceness of Yakshi no soldiers dared to take up duty at this point. Whoever had taken night duty was seen lying unconscious on the ground the next morning. This continued for a long time. On one occasion, the duty of guarding Melaankot fell on to a devotee of Lord Ganapathy. While he was taking a bath on the duty-day in the close-by Valliyoor River, his leg touched a stone lying in the river-bed. When he took the same out of the river-bed, he found it to be a very small idol of “Lord Ganapathy”, of about six inches. Feeling the divine grace, he decided to take the idol in his pouch at the time of his duty. As usual Yakshi tried to harm him but Lord Ganapathy guarded him from her blows. Seeing the soldier return harmless the next-day morning other soldiers were very curious and enquired about the reason for his safety. Initially he was reluctant to reveal the reason but on persuasion he divulged the possession of the idol and its immaculate powers. As the idol was shown to the sentry by the Lord Himself, other soldiers in the barracks of Padmanabhapuram took initiative (around 1750 A.D.) to worship the same within the barracks before commencing their official daily-routines. From that day onwards “Lord Ganapathy ” became a war-God of the Nair Brigade. As the idol was obtained by the will and blessings of the Lord from a river-bed, the idol is considered as self-revealed, one of Lord (swayambhoo) and soldiers were bestowed with the responsibility of preserving the idol at all cost without causing any damage to it forever.

They continued to worship this idol at Padmanabhapuram till it was shifted to Thiruvananthapuram, during the reign (1758-1798 A.D.) of Sree Karthika Thirunal Maharaja, popularly known as Dharma Raja. In this context, it has to be mentioned that Sree Padmanabhaswamy temple possesses, perhaps, the largest and most fabulous hoard of palmyrah-leaf records ever discovered in Kerala, dating back to 550 Malayalam (Kollam) era (1375 A.D.). These records are popularly known as Mathilakam records and are written in ola (palmyrah leafs) and kept in churunas (scrolls). In churuna 11 yrs old 150 it has been stated in one of such records that silver throne of Maharajah was brought from Padmanabhapuram for his use in 935 ME/1760 A.D, which indicates the year of shifting of capital to Thiruvananthapuram in 1760 A.D. In another such record (Volume 13, Churuna 1282 of 946 M. E / 1771 A.D.) it has been stated that “to be free from the obstacle of rain during the ezhunnallathu (procession of Maharaja) towards east 300 coconuts have been broken at the Pazhavangadi Ganapati temple.” This record throws light that the temple was in existence at Pazhavangadi earlier than 1771 A.D.

When the capital of Travancore was shifted in 1760 A.D. from Padmanabhapuram to Thiruvananthapuram, a major portion of the army was also moved to Thiruvananthapuram. The idol of Lord Ganapathy was also taken to Thiruvananthapuram and for sometime kept under a peepal tree of Sree Pazhaya Sreekanteswaram temple. Then with the generous help of Dharma Raja a small shrine was built in the Magazine Area, located in the Fort Area (present Pazhavangadi) around 1765 A.D. Renovations were carried out in later years particularly during the period of Ayilyam Thirunal Rama Varma Maharaja (1860-80). Subsequently two minor deities were installed viz, Goddess Durga Bhagavati (symbolizing sarva-shakthi-swaroopini or as an embodiment of all energies) and Lord Vettakkorumakan (younger son of Lord Shiva in Goddess Parvati and is considered as war-God with churika (dagger) in hand). Thus all deities in this temple are ideal and best suited for the welfare of soldiers and success in warfare. The exact dates of installation of these idols are not known. A Bhajana-mandapam was opened on September 9, 1983. Laying the foundation stone of the imposing Mandapam with gopuram on the eastern side of the temple was done on 31st December 1993 and it was declared open on March 25, 1996. Major renovations were also carried out in 1996. A Reference Library with rare collections of religious books in Sanskrit, English and other languages was formally opened at the top floor of the Bhajana-mandapam on March 9, 2003 The work of providing Lift service to the Library for the use of public, especially for the use of senior citizens started on June 23, 2006 but it became fully operative only in April 2009. Three sides of sub-shrines of Lord Vettakkorumakan and Goddess Durga Bhagavati were covered with decorated brass sheets for safety and for ambience in August 2009. 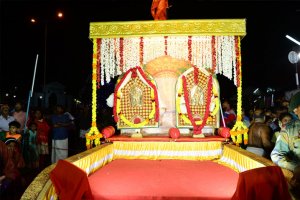 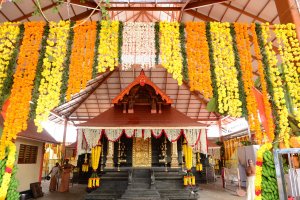