Ramatheertham is a village panchayat in Nellimarla Mandal of Vizianagaram district and has also been an Ancient Historical Site since the 3rd Century BCE.

Archaeological survey report of 1903 Ramatheertham is one of the places made sacred by a traditional connection with Lord Sree Rama. The temple and village at the base of a chain of hills of solid rock on which are some perennial springs of water, and various places each in a way associated with the name of Rama. The Jains have also had a residence here, their remains consisting chiefly of natural caves with slab sculptures set in them, and some small ruined brick temples. It is one of the few places in this direction where Jains remain. The only mention of buried remains here is in Sewel’s Lists where mention is made of great heaps of broken bricks and cut stones on a hill which is difficult to access. It was hitherto unknown that these remains were Buddhist, and this I only discovered last season. Since that time, excavations have been conducted and resulted in the unearthing of an extensive part of what has undoubtedly been a large and important Buddhist monastery. 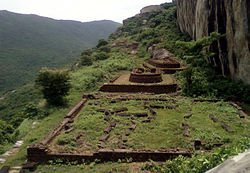 The Black Granite hills on which can find the ruins of some Buddhist and Jain structures known as Bodhikonda. Apart from it, there are two other hills by the name Guru Bhakthula Konda and Ghani Konda/Durga Konda on which one can find a 3rd-century BC Buddhist Monastic complex remains and rock-cut caves with Jain Tirthankara images on the walls of the caves.

Bodhikonda – At Ramatheertham there are three lines of hills standing parallel east and west, and each separated from the other by a narrow valley. The southernmost is known as the Bodhikonda, and on it are the spots connected with Rama, and Jaina remains consisting of natural caves, rock art, images, and a ruined Jain brick temple towards the southwest of the hill.

Durgakonda/Ghani Konda – The northern hill is the Durga Konda, so named from an image of that goddess which stands in a natural cave at its western base. In front of this cave and on the rock above it are some mounds. They contain both Buddhist and Jain remains.

The base of a brick stupa at the western extremity was 65 feet in diameter, and a tank beside it which was doubtless kept filled with water from the perennial spring on the hilltop. Adjoining it on the east is a detached mass of heaped rocks on the east summit of which stands a chaitya 55 feet in length. In its apse is a stone dragon in good preservation except for a part of the dome. It contained the stone lid of a relic casket. On the north and south lower sides of the mass of rock are two rows of brick cells each terminated by a small stupa or dagoba. East from this again is a pillared hall 77 feet square with rows of massive stone piers all fallen or broken.

Two other large chaityas with walls still standing for a considerable height adjoin this on the east, and north of them on the outer face of the platform is a long row of cells and other buildings. The other mounds at the eastern extremity of the platform are as yet only partly explored. A stone statue of Buddha with the graceful flowing robes of the Amaravati sculptures is the only one of the kind as yet found. The chaityas are irregular in their orientation, probably indicating different periods of construction on the hill.

Post Independence Excavations – some more Remnants along these Ramatheertham hills comprising Buddhist relics and Jaina Figures. This site is now under the maintenance of the Archaeological Survey of India, Hyderabad circle.

Rama Temple – The famous ancient temple of Lord Ramachandra Swamy, Sita, and Lakshmana in Silver kavachas can be seen at this temple.

Rama Idol Beheaded – Srirama idol in Kodanda Rama temple at Bodi Konda is destroyed by some unidentified people. On December 29, 2020, the locals found that the Idol of Rama was beheaded.

Shiva Temple – Next to the eastern extremity Rama temple, there is a Shiva temple constructed in 2007. Goddess Shri Kamakshi in the Shiva temple is of religious importance and is historical too.

Also Read places to visit in and around Vizianagaram District