It is one of the finest testimonials to ancient Viswakarma Sthapathis These caves are said to be from the 7th century. The Gupta style of rock-cut Architecture which goes back to the 4th-5th century CE. Most of emperors of Gupta’s were Vaishnavas so we can see much sculptures of Narasimha, Vishnu, and Ramayana stories. They are associated with the Vishnukundina kings of 420-620 CE. These caves are dedicated to Anantha Padmanabha and Narasimha. Later Jain and Buddhist monks used these as rest houses.

These caves were carved out of solid sandstone on a hillside in the 4th to 5th centuries CE. There are several caves and the best known largest one has four stories with a huge recreated statue of Vishnu in a reclining posture, sculpted from a single block of granite inside the second floor. It was originally a Hindu cave resembling the architecture of Udayagiri and Khandagiri.

It is estimated that these caves were sculpted sometime in 4-5th century CE during the reign of Vishnukundina kings The main cave is one of the earliest examples of Gupta architecture, primarily primitive rock-cut monastery cells carved into the sandstone hills. Initially, the caves were shaped as a Jain abode and the first-floor abode still retains the Jain style; the vihara exhibits Jain monastics and includes Tirthankara sculptures. This first level of the cave is a carved vihara and includes Buddhist artwork. The site served as the Bhikkhu monastic complex during the ancient period. The walls of the caves display sculptures carved by skilled craftsmen.

The caves are surrounded by green countryside. From the high hill above the cave overlooking the Krishna River, many fine specimens of rock-cut architecture can be seen. It is a Four story rock-cut temple with East facing facade of 29m long, 16m wide. There are variations in the depth of each floor. The ground floor is an unfinished low pillared hall with 8 pillars and 7 door openings on the façade. The first storey accommodates a triple shrine at back, each with the pillared hall in front, originally dedicated to the Trinity Siva, Vishnu, and Brahma.

Sculptures on the walls represent Vaishnava deities. The second storey has a pillared rectangular shrine of Vishnu on a serpent. Sculptures of Shiva and Vaishnava and a few like the Vaishnava Alwars are sculptured later on. The top floor was unfinished with a Triple Shrine. Some of the sculptural specimens are attributed to the Chalukyan period. It has 5-meter long statue of Vishnu in a reclining position. 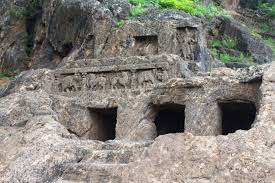 How to Reach Undavalli Caves

Also Read Place To Visit In And Around Guntur District