As per history, it is said that there are 7 devotional ponds at this place and is very powerful and there is a mark made by the lord on visible hill and it is also called Vedagiri.

According to mythology in the very distant past mountains are blessed with wings and they were passed from one place to another place. Once the Malayagiri Mountain was traveling from Kanyakumari to the Himalayas, its four wings fell at different locations on the earth, namely Vedagiri, Yadagiri, Mangalagiri, and Nandagiri respectively. Goddess here in Vedagiri is called Chench Lakshmi according to Prahladhopakyanam Narasimha Swamy married Chenchu Lakshmi according to rock inscription this temple was built by one of the kings came from Pallavi’s and his name is Narasimha Varma on 9 the century.

According to Brahma Puranam in the place the Kasyapa Maha Muni along with another 7 sages called Saptharishi’s performed 7 Yagna’s on this hill Lord Narasimha Swamy appeared following by this Yagnam it is also believed that the Lord Venkateswara Swamy set his foot on this hill. In Ramayana, Aranya Kanda Sri Rama has visited this place as part of his sojourn.

There are caves here named Ashwatthama caves. Ashwatthaama is said to have been cursed by Lord Krishna for killing the sons of Draupadi on the battlefield of Mahabharata. To get absolved of the sins, Ashwathama is still believed to be living in these caves as an immortal being and observing penance. 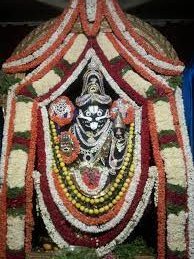 *Note: Every Month on Swathi Nakshatram Falls Abhishekam will be performed.

Also Read Place To Visit In And Around Nellore District