About and History of Vellayani Devi Temple

Vellayani Devi Temple is near Vellayani lake, a highly revered shrine whose origin dates back to 850 odd years. The temple has a huge idol locally known as Thirumudi’ which is four and half feet in height and in breadth. The idol stands for Bhadrakali, the daughter of Lord Shiva. Pure gold and precious stones adorned the front portion of the huge idol.

Darika was a demon who received a boon from Brahma which granted that he would never be defeated by any man living in any of the fourteen worlds of Hindu mythology. This made Darika immensely powerful and arrogant. Armed with this boon, Darika went on to conquer the world, defeating even Indra, the king of the gods. As his atrocities became intolerable, the sage Narada requested Shiva to contain Darika. Shiva agreed, circumventing Brahma’s boon by declaring that Darika would be killed by the goddess Kali. Shiva opened his third eye and produced Kali, whose purpose was to destroy Darika. Goddess being a woman and one not born among the humans. Goddess did so by beheading him. Goddess didn’t stop with Darika and, unable to control her rage, began destroying the landscape and the very humans for whose sake she had destroyed Darika. The Gods could not defeat her, and she was finally calmed when Shiva lay on the ground in front of her, submitting.

The temple enshrines Goddess Bhadrakali as the presiding deity. The deity, as per the scriptures, is a form of Shiva’s wrath. Goddess Kali is situated toward the north (vadakke nada). The idol is known in the local Malayalam language as Thirumudi. The idol of the Goddess in the Vellayani temple is one of the largest among the idols of Kerala Kali temples. The idol is four and a half feet in height as well as width. Pure gold and precious stones decorate the frontal view of the idol.

Other deities worshipped at the Vellayani Devi temple called Upadevatha’s temples include Lord Shiva, Lord Ganesh and Nagaraja. The temple also has a small sub-temple where another deity Madan Thampuran is enshrined.

In the temple Antler is also worshipped. The circulating notion about this is that the antler serves as a medium to invoke the spirit of the divinity at a new-built temple. One of the antlers kept in the Sanctum sanctorum oriented towards the east is from the Thekkathi.

The shrine played a major part in the social reformation of Kerala as it had let all communities to enter and worship the chief deity. The mega festival usually lasting more than 50 days itself is unique while considering the other festivals in India. Wide ranges of customs go with the festivals. Many of the customs are exclusively performed by certain classes of people. These observances and customs are not seen or hardly practiced anywhere. People of all communities participate with much pomp and splendor and stand for unity.

Karadi Kottu’ is the maiden custom related to the festival performed with a special drum. The performer is locally known as Panan’.

Kalamkaval’ is a famous custom practiced at the temple premises and nearby places during festivals. It is believed that the Goddess Bhadrakali had searched her enemy Darukhana In all directions before putting him to death. Devotees commemorate this legend by seeing this unique Kalamkaval. In Kalamkaval, the chief priest, not a Brahmin, carried the main idol on top of his head and performed until he became unconscious. It is believed that the performer gets enough power to carry the huge idol by the blessings of Amma.

Uchabali’ is another custom performed at midnight. About sixty four gestures like in Kathakali Used for the performance. Mathsyam, Sampannam, Chathurasramam, sarpa mudra, and jyoti mudra are some of these gestures. Virgin girls are usually prohibited from watching Uchabali’. A beautiful crown built of coconut palm is fixed at the spot of Uchabali.

The festival, Kaliyoottu, ended with a grand procession known as Arattu. During Arattu’ the idol is cleaned using water collected from 101 pots. A girl below ten years performs the function with all its glory. 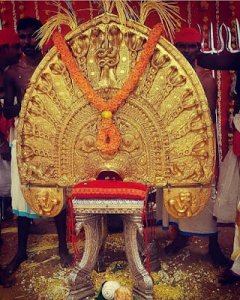 Madhu Pooja is the special pooja performed to the Goddess.

Festivals celebrated at the Temple

-The Vellayani Devi Temple is a highly revered shrine in Kerala, dedicated to Goddess Bhadrakali.

-Vellayani Devi Temple is renowned for celebrating the longest non-pilgrimage festival of South India and the duration of the festival is around 64 days. This festival is held every three years, usually between February and April. The festival is known as the Kaliyoottu Mahotsavam, which literally means “the festival to sumptuously feed Devi. Kaliyoottu is the dramatic presentation of the genesis of Bhadrakali and Darika the representatives of good and evil respectively, their confrontation and later the extermination of Darika in devotional terms and with rhythmic footsteps.