About and History of Guruvayur Temple

Guruvayur Temple is a Hindu temple dedicated to Lord Guruvayurappan. According to legend, Janamejaya conducted a sacrifice to destroy all the snakes of the world including Takshaka, who was the cause of his father Parikshit’s death. Hundreds of thousands of snakes were slain as they fell into the sacrificial fire, but the ritual was interrupted by a Brahmin named Astika before Takshaka was murdered.

Since Janamejaya was responsible for the death of millions of snakes, he was afflicted with leprosy. He lost all hope of a cure. One day Sage Atreya (son of Atri) came before Janamejaya and told him to take refuge under the feet of Krishna at Guruvayur. Atreya told him that in the temple at Guruvayur the effulgence of Shri Hari is at its best and Vishnu showers his blessings on all devotees. He immediately rushed there and spent the next ten months worshiping the god of Guruvayur. At the end of ten months, he returned home healthy and took the astrologer to task for making a false prediction. The astrologer told him that he would find the mark of a snakebite on his left leg. He had escaped death only because he was in a temple where Anantha (the emperor of serpents) was present and Anantha was the brother to the God at Guruvayur where he had finished worshiping.

The king then decided to build a full-fledged temple at Guruvayur. In time, this temple came to be downgraded and reduced to poverty during the days when Kerala was ruled by the Perumal’s. The Perumal rulers were mostly Shaivites and did not extend their patronage to Vaishnavite shrines. The Shiva temple at Mammiyur received their patronage and with the shift of royal patronage, the worshippers also moved to the Shiva temple. The Guruvayur temple was thus reduced to utmost poverty. However, one day, a holy man went to the Mammiyur temple for food and hospitality for the night. Though the temple was affluent, the temple authorities pretended they had nothing and scornfully directed him to the neighboring Guruvayur temple. When the holy man entered the precincts of that temple, he was courteo3.20 received by a Brahmin boy and sumptuously fed. The righteous man was very much pleased and he pronounced a blessing. According to the legend, the Mammiyur Siva temple began to decline, and the fortunes of Guruvayur Vishnu temple progressed from strength to strength.

Pre-colonial age: In the 14th century, the Tamil literature “Kokasandesam” refers to a place named “Kuruvayur” and in the 16th century (fifty years after Narayaniyam was composed) there are also multiple references to Kuruvayur. In Old Tamil, “kuruvai” means “sea”, hence the village on the Malabar Coast may be called Kuruvayur.

The earliest temple records date back to the 17th century. The earliest mention of the many important Vishnu temples of Kerala is found in the songs of Alwars, Tamil saints, whose timeline is not exactly fixed. However, by the end of the 16th century, Guruvayur had become the most popular pilgrimage center in Kerala.

Colonial age: In 1716, the Dutch raided Guruvayur. They looted treasures and set fire to the Western Gopuram (later rebuilt in 1747). In 1755, the Dutch destroyed the Trikkunavay temple and the Brahmins fled from there.

In 1766, Hyde3.00 amof Mysore captured Kozhikkode (Calicut) and then Guruvayur. He demanded 10,000 fanams in ransom to spare the temple. The ransom was paid but due to insecurity pilgrims receded. At the request of the Malabar Governor, Shrnivasa Rao, Hyder Ali granted a Devadaya to save the temple. Later, in 1789 CE, Tippu Sultan invaded the province. Tippu destroyed the smaller shrines and set fire to the Temple, but it was saved due to timely rain. Tippu lost to the Travancore and the English in 1792. The idol, which had been hidden underground in anticipation of the Tippu’s takeover, was re-installed on 17 September 1792.

Ullanad Panikkars rescued and looked after the temple from 1825 to 1900. From 1859 to 1892, the Chuttambalam, the Vilakkumatam, the Koottambalam, and the Sasta shrines were renovated and roofed with copper sheeting. In 1900, the administrator Konti Menon fixed the hours of worship and led the drive to keep the temple premises clean. He set up the big bell and reconstructed Pathayappura (granary). In 1928, Kozhikode once again became the administrator of Guruvayur.

Post-colonial age The Vilakkumatham: On 30 November 1970, a massive fire broke out in the temple, gutting the whole chuttambalam and the entire Vilakkumatam on the west, south, and north sides. 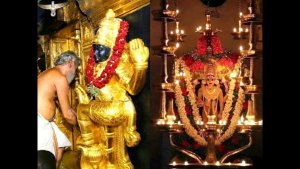 The temple tank (pond) on the northern side of the temple is called Rudratheertham. According to legend, for thousands of years, Lord Shiva used to bathe on the southern bank of this pond. Since Shiva is also known by the name ‘Rudra’, the pond came to be known as Rudratheertham.

Throughout the Year, Sri Krishna Janmashtami

Ekadasi, the eleventh day of every lunar fortnight, is very auspicious to the Hindus. Of the 24 Ekadasis in a year, the Vrishchika Ekadasi (Suklapaksha) has got special significance in Guruvayur. It falls in the Mandala season. The Navami (9th day) and Dasami (10th day) are also very important. Ekadasi Vilakku starts a month before the Ekadasi day as offerings by different persons, families, and organizations.

On Navami day, the Vilakku is lit with ghee as an offering by the Kolady family. The Dasami Vilakku which used to be an offering of Zamorin Raja is now conducted by Guruvayurappan Sankeerthana Trust. After the temple is open on this day for Nirmalya darshan (3.00 AM), it is closed only at 9.00 am on Dwadasi Day (12th day), thus allowing continued darshan for devotees throughout Dasami and Ekadasi Days. On Dwadasi day there is a custom of offering a token amount called Dwadasi Panam in Koothambalam for the welfare of the family. A highlight of the Ekadasi is the memorial tribute for Gajarajan Kesavan.

The Karanavar or head of the elephant family places a wreath at the statue of Kesavan in front of the Sreevalsam guest house and all the other elephants stand around and pay obeisance. On Ekadasi day, the Udayasthamana Pooja (continuous pooja) is conducted by the Devaswom itself. After the morning seeveli, on Ekadasi, there is a grand elephant procession to the Parthasarathi temple since it is regarded as Geethopadesam Day also. On Ekadasi, after night pooja the famous Ekadasi Vilakku with elephant procession takes place and provides a fitting finale to the festival.

At Annalakshmi Hall located outside the temple for thousands of pilgrims at 10 A.M and 7.30 P.M.

Offering one’s weight of such materials as water, coconut, butter, sugar, fruits, copper, silver, gold or any other materials is the popular vow taken by devotees. The devaswam will supply most of these materials. There is no advance booking, but for materials such as flowers, etc., which may not be immediately available, the Devaswom should be informed at least a day in advance, and the devotee should bring them. The weighing facilities are on both sides of the entrance. for the nonhindus, the thulabharam facility is available near the Kalyana Mandapam. The expenses involved should be remitted after the offering and receipt are obtained. There are three thulabhram counters available in the temple and there is no advance booking for thulabharam offerings. The items will be available with devaswom or contractor or devotees can perform with their own items.