Jaipur, the capital of Rajasthan (“the Land of Kings”), where Lord Krishna is the centre of devotion, is a very blessed city to be home of many principal Deities that were originally worshipped by the Gosvamis of Vrindavana.

This temple is difficult to find as locals don’t know its location. Location is: Choti choppad and Badi Choppad ke bich ki red light par. Please ask auto-rickshaw to take you to this location.

This temple is difficult to find as locals don’t know its location. Temple is very close (100 meter walkable distance) from Sri Damodara Ji temple i.e. Choti Choppad and Badi Choppad ke bich ki red light par. Please ask auto-rickshaw to take you to this location. It is on shop no. 295. Climb on the staircases and you will reach the temple

This temple is difficult to find as locals don’t know its location. This is very close to Sri Damodara Ji temple on the same road. Please ask auto-rickshaw to take to Chaudi sadak near Tadkeswar mandir. Sri Madan Mohan and Sri Madan Gopal Ji were originally at this temple, before Sri Madan Mohan went to Karauli. This temple is in Kanaka Vrindavana on Amber road in Jaipur. Temple is very close (next) to Sri Sri Radha Madhava of Srila Jayadeva Gosvami at Kanaka Ghati. In the 18th century Natwarji Temple are the Deities of Amarkuar, Jaya Singh’s sister. There is beautiful silver work (known as meena work, done with mirrors and coloured glass based in silver or white metal) around the altar. Galta, about 13 km from Jaipur downtown, is a holy site which has very deep significance in the history of the Gaudiya Vaishnava sampradaya. During the attack of the Mughals, Sri Govinda ji was moved from Vrindavana to Galta under the rule of Maharaja Jai Singh.

It was here at Galta that Srila Baladev Vidyabhushan established the superiority of the philosophy of Gaudiya Vaishnavism amongst all the other sampradayas, and the place where that transcendental debate happened, and by the grace of Sri Govinda Dev, he was victorious. Great saint Galav also performed his bhajan here.

This temple is next to the boundary wall of Hawa Mahal. It is a big temple. Hawa Mahal is close to Sri Govind Dev Ji temple. Maharaja of Jaipur worshipped these beautiful Deities. Goverdhan Nath ji temple dates back to the year 1790.

This temple is near Hawa Mahal, near the Post Office. Karauli is 182 km southeast of Jaipur and 100 km southwest of Mathura. Nearest Railway station Hindon city 29 km which is on western railway.

After Lord Sri Krishna left this world, Maharaja Yudhisthira, unable to bear the separation from the Lord, also decided to leave the world. Before leaving, he coronated Maharaja Pariksit as the emperor of the world, and the great-grandson of Lord Sri Krishna, Vajranabha, as the king of Mathura. Vajranabha was requested by the great devotees to restore the glories of Vrindavana.

So he decided to excavate those holy places of Vrajabhumi in which Lord Sri Krishna had performed His lila, and to install beautiful and sacred Deities in principal places of Vraja dhama. He sat on the banks of the Yamuna under a kalpavriksha tree and prayed to Sri Sri Radha and Krishna. By the auspicious mercy of that kalpavriksha tree, Radha and Krishna’s mercy entered his heart and revealed to him the holy places of Sri Krishna’s lila. Later, when he decided to install Deities, he called Vishwakarma, the architect, of the demigods. The three principal Deities carved by him were Sri Madan Mohan, Sri Govinda and Sri Gopinath.

In 1972, His Divine Grace A.C. Bhaktivedanta Swami Prabhupada, the Founder-acarya of ISKCON, travelled to Jaipur with some of his western disciples. Throughout the week-long festival large crowds came to attend Prabhupada’s lectures. Srila Prabhupada would chant prayers from Brahma-samhita and then lectured in Hindi. “This whole city is made of devotees of Radha-Govindaji,” Srila Prabhupada commented.

Sri Govindaji was still being worshiped by thousands of devotees. Srila Prabhupada and his followers were happy to see this. Thus, there was a mutual exchange of love between the inhabitants of Jaipur and the ISKCON devotees, for these devotees were also worshipers of Lord Govinda, or Krishna, the Supreme Personality of Godhead. Just as Srila Prabhupada’s disciples were moved to see a living legend of Krishna consciousness in Jaipur, so the queen of Jaipur, Maharani Gayatri Devi, was moved by the devotion of Srila Prabhupada and his followers.

Jaipur city was fashioned according to Silpa-sastra, the part of the Vedas dealing with architecture and design. Although established in the early 18th century, it is still functional and appreciated for its masterful construction. The city was arranged on a grid of wide avenues connected by smaller roads, all focusing on the central palace where Sri Govindaji’s Temple stands in a beautiful garden. When the Govinda Ji’s temple doors were open, a very pious and great Vaishnava, Maharaja Jai Singh could see his beloved deity from the royal quarters. 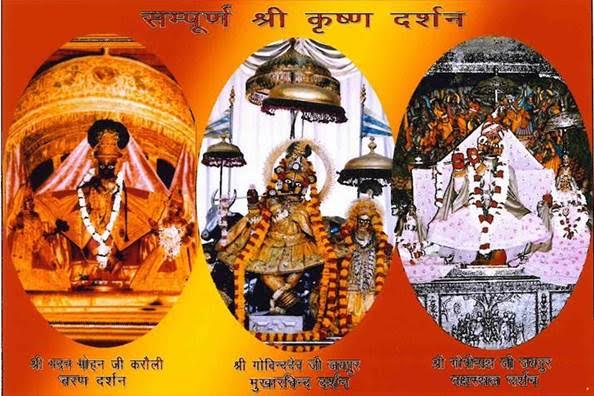 Srila Prabhupada explains in Sri Caitanya Caritamrta purport (Adi 7.73): “According to the Vedic principles, there are three stages of spiritual advancement, namely, sambandha-jnana, abhidheya and prayojana. Sambandha-jnana refers to establishing one’s original relationship with the Supreme Personality of Godhead, abhidheya refers to acting according to that constitutional relationship, and prayojana is the ultimate goal of life, which is to develop love of Godhead.” Madana Mohana is predominating deity of sambandha, establishing our relationship with Lord Krishna as His servant.

Govinda is the predominating deity of abhidheya, to be engaged in His devotional service. And Gopinath is the predominating deity of prayojana. Therefore the worship of these particular deities is very helpful for the attainment of pure devotional service. This is why it is a very powerful spiritual experience to see these three deities, bow down at their feet, and humbly beg them respectively for sambandha, abhidheya, and prayojana. “The Vedic literatures give information about the living entity’s eternal relationship with Krishna, which is called sambandha. The living entity’s understanding of this relationship and his acting accordingly is called abhidheya. Returning home, back to Godhead, is the ultimate goal of life and is called prayojana.” –Sri Caitanya Caritamrta, Madhya 20.124

Jaipur, the capital of Rajasthan is well connected by Air, Rail and Road transport with rest of India. It will take approx. 6 hours to reach from Vrindavana to Jaipur. It is advisable to make a visit to Karauli (which is a little diversion from the main highway via the town of Hindaun) to have darshan of Sri Madan Mohan Ji while travelling to-and-fro between Jaipur and Vrindavana. 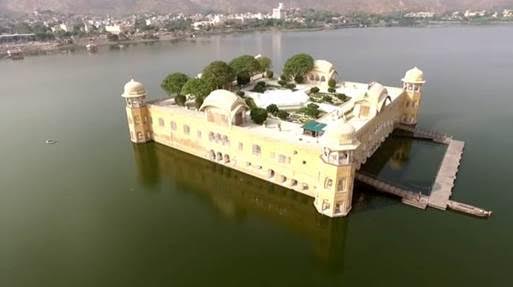