It was built in the 12th century A.D. When the Kakatiya king Prola II went hunting and was resting under a tree, he heard the chanting of Lord Rama’s name. Wondering who it was in the middle of a dense forest, he discovered a stone idol of God Hanuman, in seated posture and the voice coming from the vigraha. Having paid his respects, he returned to his capital, and that night, Lord appeared in his dream and asked him to construct a temple.

Aurangzeb sent out his armies to all corners of the country for further expansion of Mughal Empire. At this temple, the army couldn’t even step close to the compound wall. When the general reported this to Aurangzeb, he himself went with a crow bar to break down the temple. At the threshold of the temple, he heard a deafening roar rumbling like thunder, and the crowbar slipped from his hands as he was shaking in fear. Then he heard a voice in the heavens “Mandir todna hai, to karo man ghat which is why the place got the name kar-man-ghat. And to this day, Lord Anjaneya sits peacefully meditating and blessing devotees, as Dhyana Anjaneya Swamy.

The presiding deity of the temple is Lord Hanuman and in the temple complex other deities are Lord Rama, Lord Shiva, Goddess Saraswathi, Goddess Durga, Goddess Santoshimata, Lord Venugopala Swamy, and Lord Jagannath. 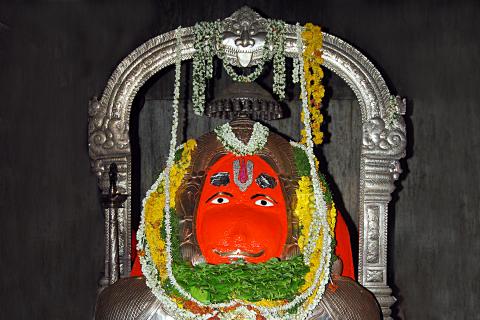 How to reach Karmanghat Hanuman Temple

Also Read Place To Visit In And Around Rangareddy District