Ramalingeswara Temple, Nandikandi is located in the state of Telangana with the main deity Lord Shiva. A brass lingam sits on a beautiful, tall star-shaped granite pillar. The temple, too, is star-shaped and was built in the 11th century. A large stone in the temple has some of its history inscribed on it and dates back to 1086. The temple was built at the time of the valiant Kalyan Chalukya. He is supposed to have donated the temple, a Veda Pathashala, promised to do Nitya annadanam to all saints who travelled long distances to do darshan of the temple, and is also said to have adopted the neighboring village of Kovvuru. All of this is inscribed on the large single block of stone. The temple is small and only has one story. The base of the temple is star-shaped and it is built to open up into a lotus shape. The pillar was probably built in the 10th century, while the entrance could have been built in the 11th century.

The temple is an example of the Kalyana Chalukya style of architecture, and according to archaeologists, this temple might have been built during the rule of Vikramaditya V. in 1014 AD and attributed to someone else earlier-make up your mind. The entrance arch has seven inverted lotuses on top, called a toranam, with gaps between each inverted lotus. It is said that the rays of the morning sun filter through each of these gaps and fall directly on the Shivalingam in the sanctum of the temple. Each gap represents a season. The rays fall into the sanctum sanctorum, lighting it up. It is the great good luck of the devotee who catches this phenomenon.

There are exquisite sculptures in every corner of the temple. The four pillars in the Central Hall form a mandapa or navaranga, as it is called. Students visit the temple to understand the skill involved in its construction all those centuries ago. The pillars, each made of a single block of stone, are decorated with figures of the Hindu pantheon—Lords Brahma, Vishnu, Shiva, Narasimha Swamy, Varaha Swamy, Nataraja Swamy, Devi Mahishasur Mardini, Devi Saraswati Mata, and Gaja Lakshmi. Because both Shiva and Vishnu are represented, this becomes a Hari Hara Kshetra. One of the pillars is like a blueprint of the temple, with the design etched beautifully on one single pillar. There are also sculptures of dhikpalakas (guardians of the directions), beautiful women, demons, etc. The sanctum sanctorum has been designed in the shape of a star, while the shikaram of the temple is designed like a lotus.

There is a four-foot-tall statue of Lord Ganesh in the southern part of the sanctum. The other attraction is a humongous Nandi, carved out of black stone, quite the star of this temple. The temple is said to have been attacked by Muslim invaders, and some of the statues bear the scars. The Ganesh statue has been repaired and painted. The Nandi too has been repaired, but it still has a wounded look. There is a notation on one of the paws of the Nandi, which is presumed to be the name of the sculptor.

A tourist guest house was built nearby some two years ago but is still not in use. But a boundary wall has been built and the area around the temple has been paved to make walking easier. The temple is registered with the Endowments department, but that is in name alone. It is the villagers who help to run it. Small amounts are deposited in the hundi by those who believe that some of their wishes have been fulfilled. A curious fact about the village is that it does not have a single potter or kumara family. The story goes that Lord Shiva had once been disturbed by the noise made by a potter’s family and so banished them forever from this village. 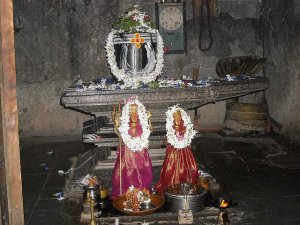 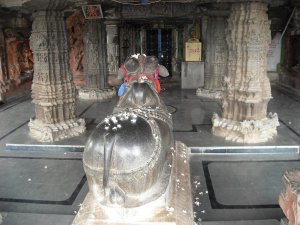 The Best Time to Visit

Also Read About Places to visit in Medak District