Kondaveedu Fort was established in 1115 CE by Gopanna, a commander of Buddhavarma of the Telugu Choda dynasty. Later it came under the Kakatiyas and was occupied by Prolaya Vema Reddi (1325–1353) who shifted his capital from Addanki to Kondaveedu. Later, the fort was under the control of Vijayanagar Kings, Gajapatis, Golkonda sultans, and lastly under the French and British.

In 1323, Warangal and the whole of Andhra Pradesh came under the reign of Tughlaqs rulers of Delhi. Their depredations and despotic reign resulted in the formation of a confederation movement by the Hindu Musunuri Nayaks, who ousted the Muslims from Warangal, and the Reddys were part of this movement. The Reddys of Kondaveedu were initially feudatories of the kings of Warangal. From inscriptions, it is inferred that their rule overlapped with that of the Korukonda Reddy’s and that they shifted from their earlier capital at Addanki in Guntur to Kondaveedu.

The founder of the dynasty was Prolaya Vema Reddy, the son of Prola. They ruled in the region around present-day Vijayawada and Guntur towns for nearly a hundred years (1328–1428). Their first ruler Prolaya Vema Reddy (followed by five other rulers till 1428) who ruled till 1353, strengthened the defenses of his kingdom by building several forts, which included the Kondaveedu Fort.

Early in 2019, remains of a Buddhist stupa were found under a dilapidated Hindu temple at Kondaveedu fort. The remains date back to the later Satavahana period 1st to 2nd century CE. This discovery pushes back the history of Kondaveedu to the Satavahana period.

There are three forts on top of the narrow hill range that are now in ruins the earliest-built fort dates to the 12th century. The main fort built by the Reddy dynasty and refurbished by subsequent rulers, located at a height of nearly 320 meters, was considered then as one of the strongest forts in the region. 21 structures have been identified within the fort. Its fortifications built with granite stones comprise huge ramparts, magazines, warehouses, granaries, and wells.

There are two entry gates into the forts, called the Kolepalli Darwaza and the Nadella Darwaza. The entrance gate is three-storied, massive, and made of granite stone blocks. A building built with rock pillars and covered with rock slabs has 110 meters long inscriptions. A defense bunker is also seen.

The source of water supply to the inhabitants of the fort was from three sources namely, the Mutyalama Cheruvu, the Puttalamma Cheruvu, and the Vedulla Cheruvu Cheruvu in the Telugu language mean pond. On the way to the fort at Kothapalem known as Puttakota in the past), at the foothill of the fort, an embankment is seen which is inferred as a security ring bund to protect the royal family palaces and houses of the main functionaries of the fort.

The fort’s ruins on the southwest side of the Kondaveedu village are in the shape of an equilateral triangle, and at the turning angles of the triangle at the southwest and northeast, tower bastions are provided, which form part of the façade wall of the fort. A single wall of 30 kilometers length straddles the hills.

A temple known as the Gopinathaswami temple dedicated to Lord Krishna lies at the foot of the hill; its bunched stone pillars are carved out of a single rock. Both Hindu and Muslim architectural styles are seen in the forts. A mosque is also located within the fort. 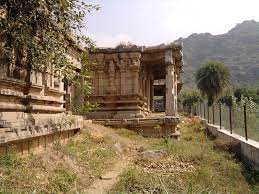 How to Reach Kondaveedu Fort

Also Read Place To Visit In And Around Guntur District